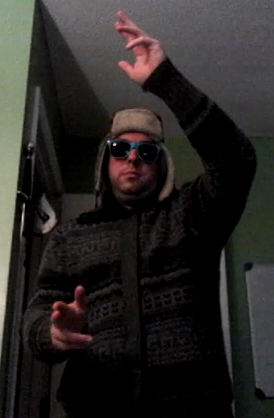 All my talk of OpenNI, C++, NodeJS, etc in recent months was pretty much all boring until you put it into practice and make something cool.

I did just that….well, I think it’s cool.  And just plain weird, really.  Here’s a motion controlled instrument I made that’s Javascript through and through.  It’s Node.js at the heart, with a HTML/Javascript display.  And yah – I snuck in some C++ to wrap the ever awesome OpenNI SDK.

I present to you….the “Upright Spass”:

I’ve played around several months ago with the Kinect SDK playing a keyboard in thin air.  What I was playing with then was Windows only, Kinect only, and need Adobe AIR to route things to websockets for the browser.

So using my new found powers over the past few months with:

….I now have a nice little handtracking utility that runs in Node.js using OpenNI and NiTE to power my skeleton tracking.

I didn’t care for the horizontal layout of my old virtual piano – so I inverted the axis, and made the instrument control upright.  Hence – “Upright Spass”….the anti-bass, the bass that is not a bass, just empty space.

What was also crazy hard was producing decent sound with Javascript.  I don’t care what language you do this in, creating sounds from scratch is hard.  You could go years studying and tweaking new sounds to match what already exists in the world.

So to solve this?  MIDI.  Hell yes, MIDI!  I found a nice robust Node.js MIDI addon.  So instead of making my own sounds banks, I send it out over my E-MU MIDI USB controller to my Korg X3 keyboard

And wow….the site I grabbed this image from is calling this keyboard (made in 1993) “vintage”.  I feel old, damn.

Anyway – I’m running Ubuntu for this whole operation, so to route the MIDI from Node.js to my keyboard, I used Jack.  Jack offers you a nice little audio server.  You can patch in your MIDI through out to the E-MU MIDI USB device in.  Voila, start make the link and start the Jack server.

So, I got this motion controlled midi thing all rigged up, and it’s REALLY hard to play.  There were  a few problems:

Even after solving a few of these problems, the Upright Spass is really hard to play.  My performance was pretty much a disaster – but maybe I can tweak and practice and get passable at it.

My code for this is up on github.   I mentioned the link for my Node.js AddOn previously – that’s here:

and this particular project, the Upright Spass, is here:

It’s been a while since I’ve written a blog post. And even then it was a constant barrage of Web Components posts from me, leading up to a book I published with Manning called Web Components in Action. It’s all because I believed in Web Components, but until recently (right around the time my book …

Almost two years ago, I made a hefty series of posts on the promise of Web Components. Things have changed and promises were broken, but on the whole, I don’t think MUCH has changed from an implementation perspective. These days, I’ve been sucked into the awesome world of the 3D web and WebVR and soon …

I haven’t written many posts lately, especially tech related. The reason why is that I’ve been chasing the mixed reality train and learning. 3D development in general has had a number of false starts with me, and I never went in the deep end until now. This past year or so, I’ve been using both …

Ahhhhh the Hololens. I finally get to check it off my list. When I express my disappointment with not being able to try it out to my friends and co-workers that are interested in VR, it’s kinda like talking about going to Hawaii. “Ohhhh, you haven’t been? You really should, it’s an enjoyable experience.” (said, …

Last Friday, the SFHTML5 Meetup group met to discuss something called “Progressive Web Apps.” I had some preconceived notions that the topic would be pretty cool, but actually, it got me more excited about the state of mobile/web/desktop in 2016 than I could have imagined. This might sound a bit dramatic, especially given the negative tone that …

In Part 4 of my 5-part write-up, Project Setup and Opinions, I talked about lessons I took away from experimenting with ES6 Web Components. Lastly, is my wrap-up post… This was a monster write-up! In my four previous parts, I’ve shown you the basics on Web Components, what features make up a Web Component, how ES6 …

This article continues my ES6 Web Components series. The last article was the third in the series: Making an ES6 Component Class. So far, the basics have been pretty….basic. I hope I’ve given some ideas on how to create ES6 Web Components – but these basics only go so far. I do have some opinions …

One thing I didn’t cover in my last post (#2 in the series) about all the pieces that bring Web Components together is actually using ES6! It’s not a feature of Web Components, but its some seriously nice glue that lets you tie your Web Component structure together. To be honest, I’m not using it …